You often hear the saying “you get out of things what you put into them”. It’s very true. Training and running a marathon is about so much more than just the distance.

Running a marathon had always been something in the back of my head for a long time. The first exposure I had to the feat was in July 2004, when I was in California with my father. I overheard him and my aunt (his sister) deciding over the phone that they were going to run the Marine Corps Marathon in Washington, DC in the fall.

“Yeah, but it’s amazing,” he clarified to me, then laughed with my aunt. The next morning, he laced up his shoes, and started his training, even on vacation and with the hot California heat. His confidence and watching him run had a small impact on me. When the race came, eight year old me really made sure she was there. And I’m happy it was that way — I remember the spirit at the race among everyone there was indelible. I remember the brisk fall day hanging with my Bubby and Grammom (my grandparents) and walking around the ‘Washington Omelet’ (aka Washington Monument), and the spectators lining up cheering on strangers, there with no agenda or asking for anything to be gained.

I continued jogs regularly growing up through middle school, high school, and through Drexel. In 2017 as a pre-junior, I decided to run the Philadelphia Marathon. As an engineering student, I would go for small jogs on the Schuylkill River Trail, passing the Art Museum, but I had never covered a crazy distance like 26.2 miles. The decision came during a rather rough patch in my life, and I wanted to prove something to myself too, even if it was something insane as running 26.2 miles.

Most of the runs in my training were spent alone, even if it was just a small 30 minute run. It took a bit of getting used to – I was a competitive swimmer growing up, which was very much a team sport. I wasn’t quite used to having myself as my own competition. That made me look at the training as ‘Can I cover X amount of distance in Y amount of time?’ I remember later on, as soon as I started to look at it as if any run was a run to help, it also made me closer to realizing my goal. I also had long runs which I remember I would have to get up at the crack of dawn for to fit into the day. Fitting runs in was sometimes rough, but soon all the running I was doing became very rewarding — something to bust engineering and personal related stressors off. If I had time to worry, then I could run. Balancing something like training for a marathon can be difficult with an engineering curriculum, but the important thing to remember is that work is never wasted. I remember applying the same diligence I learned from the training to my schoolwork. A little of a task like emailing a TA for help is as good as running for thirty minutes. It added up. What I had done, the miles I had covered looking behind me, soon pretty much took over the 26.2 mile race day in my eyes.

Almost all the support I got from friends and family along the way was verbal encouragement. I did have a running buddy in the beginning who was also training, but we drifted apart after he returned home to Harrisburg for his co-op in the Fall of 2017. I tried to not let the thought of being alone in person during the race bother me so much. It was also great that there were apps for my family and friends to track me and send me cheers in the race.

Race day then came on November 19th, 2017. The sun was not even up by the time I got to the start line, the same place where I would finish 4 hours later. Corrals started forming. Even though the Benjamin Franklin Parkway was completely filled to the brim with all of us, I remember the feeling of being alone started to creep in again. It was all a whir when I started to run the race. Honestly, thoughts in my head swirled way too fast for me to decipher, but “What the hell” would sum it up. About two minutes later, closer into Center City, I was able to pinpoint a much needed familiar scream from my younger, eight year old brother, who was holding up a giant sign with my name in giant purple letters. One that I had never seen before. The surprise was a huge boost for me, seeing him jump up and down with a smile, with my brother. He was SO happy and excited to see me do this race. I kept going. 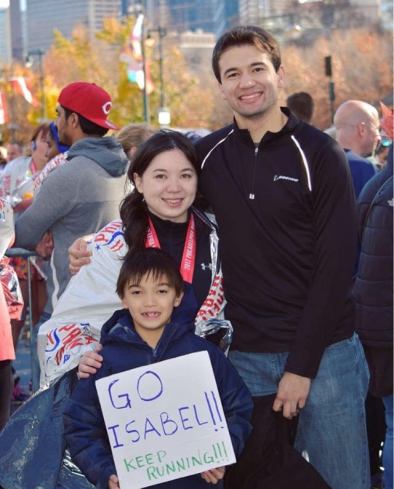 The run was very scenic. I ran through Center City and Old City. The first 15 miles were great. Soon, things started to dawn on me again as the ran proceeded onto Kelly Drive along the river. One thing that didn’t help was that it was a very windy day. The wind was certainly not on anyone’s side. I remember seeing fellow runners close to giving up because we had to fight through it and some of them were in pain from the wind. At least the 20 mile turnaround on Main Street in Manayunk was huge for a lot of people. It also started to feel never-ending again even with all the spectators from Manayunk dropping by.

The last 6 miles back on Kelly Drive again towards the Parkway was the longest hour of my life. Not that many spectators were as lined up along Kelly Drive as other spots were. I was starting to hit the infamous wall. I decided to call my dad at about mile 23, when my phone was about to die. If I wanted to hear from anyone, it was him. I remember being a bit weepy and in pain to him, but he reminded me again “This is amazing”. And he told me he was proud of me. The wall still did hurt, but 3 miles looked closer to being like a small run again. I powered through. I didn’t meet my goal time (I missed by 10 minutes), but I was still proud of myself. Sometimes powering through is still an incredible thing to do.

As I hit closer to Boathouse Row, I then remembered D.C. There seemed to be a wave of camaraderie that I remember feeling from 2004 amongst everyone as I saw more spectators. I remember a runner who had stayed within the same pace of me along Kelly Drive turned and smiled at me. In that present moment, I definitely felt that everyone there was finishing strong from the event. The race was not all about competition. The finish line was overwhelming as I crossed it. It was strange — the long haul was done, and I remember feeling very light on my feet again. I was gasping and laughing from that final dash and from seeing my little brother chase me down through the parkway, and from thinking about how I had to think about lugging myself through this huge and spirited crowd to navigate to him and my family. It didn’t matter though — everyone there had got something from the race.

I came home and stayed home for the entire week, doing all my homework online through communication with my professors, and I remember partially being stressed from that, but hey, I freaking ran 26.2 miles and I worked towards it too. I definitely feel nothing discounts something like all the work I had showed myself that I was capable of doing.

On race day, I powered through with everyone, and I little-by-little achieved something huge to share. That’s the one thing that makes me happy when look back to the training and race day.

My dad is now back to running, and we are planning on doing the Broad Street Run and a Steelman Triathlon together over the summer. One of my best friends also recently told me he wants to try Broad Street with me as well. I would be so excited if the three of us get to run Broad Street together. Both my father and my friend are two of my biggest supporters, and I can only hope that I can give the support they deserve as well. I can only hope that they learn something for themselves like I did. I really hope something unique comes to them if we can race together.

If anyone really wants to run a race like a marathon, I definitely recommend it. Running a race is such an individual experience that one can fully own. Yet it can be shared. It’s so much more than a distance.

View all posts by swedrexelwellness

1 thought on “So Much More Than Just the Distance”